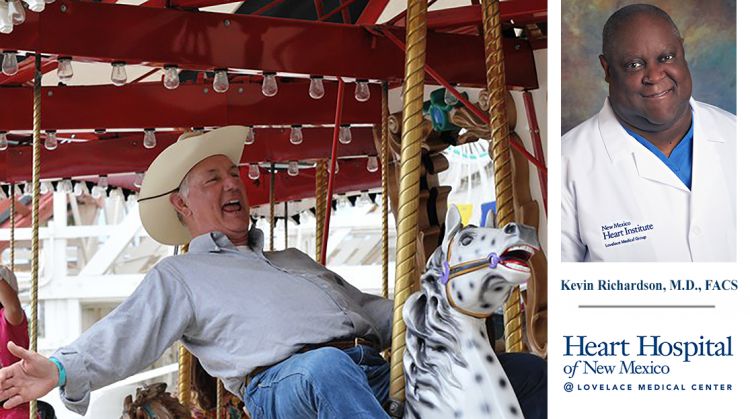 “I always try to make things pleasant,” said the 73-year-old retired, aerospace engineer living in Los Lunas. “I try to tell jokes, be happy and upbeat. I will say ‘Hi, how are you doing?’ to almost everyone I meet.”

So when he learned that his only option to fix three clogged arteries was open heart surgery for a triple bypass, he focused on a more positive note. “Well, if I can live past August, I will have outlived my father and both my grandfathers,” he said.

John knew during his childhood that he had a heart murmur, but it didn't seem to bother him. One of his brothers had also developed severe blockages in his arteries, but was able to correct them with stents.

A smoker for 19 years during his 20s and 30s, John’s diet often consisted of red meat, vegetables and salads, whipped butter (never margarine) and lots of milk. “I loved cold milk with chocolate chip cookies before bedtime and in the middle of the night,” he admitted. “I've cut back on that snack some since then. I guess I always tried to eat well, but I probably ate too much.”

Compounding his condition was a sedentary lifestyle. Now retired, he sat all day at work, first as an engineering draftsman for Caterpillar Tractor Company in Illinois and later for engineering firms in California and Oregon that built military missiles, nuclear reactors and components for the space shuttles.

Without much cardiovascular exercise, John’s health started to decline during decades of stress, trauma and anxiety. 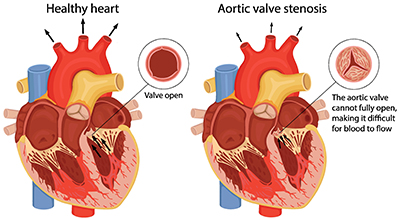 It was at age 58 that John started to feel a new pain – discomfort in his chest – especially after physical exertion. “I went to my primary doctor and asked, ‘What’s going on?’ He told me that I have aortic valve stenosis, which is a calcium build-up in my aortic valves.”

Aortic valve stenosis is a type of heart disease in which the valve between the lower left heart chamber and the body's main artery (aorta) is narrowed by layers of calcium. The obstructions reduce or even block blood flow from the heart to the aorta and then to the rest of the body.

After leaving California and settling in Los Lunas, the discomfort in John’s chest started to get worse. He was trying to stay active, turning his love of horses into a part-time endeavor of training horses for pleasure riding.

“I would get Buddy my horse out and try to walk him 80 yards to the back pasture to turn him loose and let him run,” John said. “But I would have to stop two to three times just to walk that far. That’s when I knew I needed to do something about this.”

He connected with a new primary care doctor who referred John to a cardiologist. Upon the doctor’s recommendations John was scheduled for a thoracic endovascular aortic repair (TEVAR), a procedure that involves the placement of a metal mesh tube to clear and support the artery.

John’s doctor performed an angioplasty by accessing an artery in his right hand to insert a long tube that would go up to his heart. The plan was to inflate a small balloon to widen the artery so the metal mesh tube could be installed. However, when the doctor got to the heart area, he didn’t see just one clogged artery, but three. The only way to fix John’s condition was open heart surgery for a triple bypass.

“I had dreaded the possibility of getting my chest cracked open for years,” he admitted. “It was a scary situation, but it was my only option to live.”

During the surgery, Dr. Richardson took a portion of a vein from John’s left leg and used it to bypass three sections of clogged arteries in his heart.

“The surgery was a success,” said John, “no complications at all. However, it was very invasive and knocked me down. I stayed in the hospital for an entire week. After I got home, I recovered for another six weeks before I was cleared to drive.”

Unfortunately, he could not spend any time with his horse, Buddy. “I really couldn't do much handling with him, because if he pulls away, he might rip the incisions and interfere with the bone grafting. It takes about six months for the breastbone to heal after surgery.”

To speed-up his recovery, John began a structured exercise program at New Heart Fitness and Health, a comprehensive fitness, cardiac and pulmonary rehabilitation center in Albuquerque.

“They had me exercise on four different machines,” John explained. “There’s an elliptical machine where you are pedaling standing up, a stationary bicycle, an arm machine that was surprisingly therapeutic and a treadmill.”

But instead of quitting, John completed all 26 workout sessions, two to three times a week for nine weeks. “I may not be pretty, but I’m not stupid either. I knew this was something I had to do. If I had exercised like this when I was younger, I would not have been in the trouble I was in. I just dedicated myself to finishing it.”

Eventually, John was well enough to start taking Buddy out for short rides. “I probably started riding a week or so before I was supposed to, but I just couldn’t help it.”

He also couldn’t help but heap praise on the medical staff at the Heart Hospital of New Mexico and all his doctors, especially Dr. Richardson.

“The staff in the recovery and the rehab in the hospital were terrific. Even the food service staff was very supportive and took care of me,” John said. “As for Dr. Richardson and his staff, I have such heartfelt gratitude for his education, training and his skills.”

If you would like to learn more about the services of the Heart Hospital of New Mexico, visit our website.