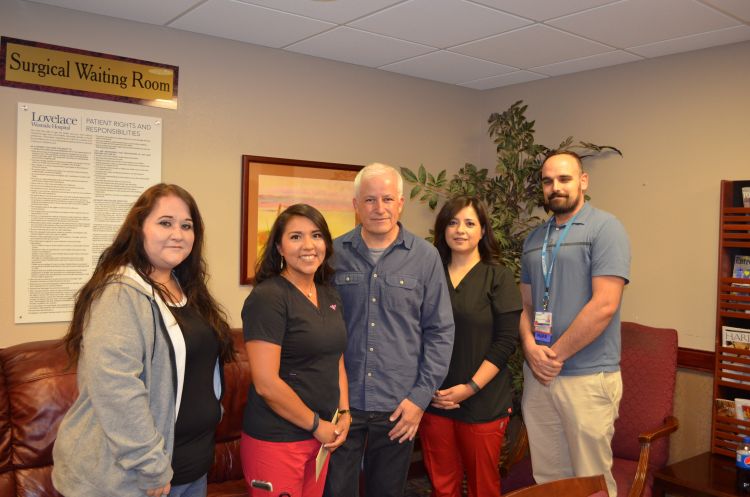 John Gallegos had been feeling a bit off for almost two days when his niece, Sarah Padilla, finally convinced him to go to the hospital. Sarah worked in records management for Lovelace Westside Hospital, which was where John found himself driving around 4am.

“I didn’t know it then, but I’ve done a lot of research,” John says. “Now I know you don’t remember anything after a cardiac arrest.”

Daniel Kroupa, who was working in the registration window that night, remembers what happened. “John was complaining of mild chest discomfort for two days,” Daniel recalls. “He was in a good mood, joking around. Suddenly he shouted, ‘Oh God, here we go,’ and started to faint. So I stabilized him and ran back to grab Eddie [Stokes, the nurse].”

Usually Daniel would have made a call over the intercom, but he knew Eddie and his team were already working on another code in the Emergency Room, so he had to act fast.

Eddie and Daniel got John into a wheelchair and into a room. Danielle Aguino, a technician, took his vitals and saw he was unresponsive. She started CPR while Eddie grabbed the physician, Dr. Brent Gear.

The team worked on resuscitating John for 40 minutes, shocking him seven times to get his heartbeat back.

“Most teams will only work for half an hour,” John says, citing his research. “I know it was a miracle that they worked as long as they did.”

“We kept almost getting you back,” Danielle explained to John at a recent event held at the hospital to celebrate his life. “We weren’t going to let you go.”

John says he knows from the statistics he’s learned that he was very lucky that night for lots of reasons. His friends and family now call him Mr. Milagro, which means “miracle” in Spanish.

“Most patients who go into sudden cardiac arrest don’t survive,” he says. “If you have someone there to help you, your chances increase. But I live alone.” John didn’t know he should have called 911. But he is glad he followed his niece’s calls to get him to go to the ER.

Another thing John knows now is that just because you don’t have the indicators for heart disease, it doesn’t mean you’re safe from a heart attack. “I have no family history of heart disease,” he says, listing the classic predictors; “I wasn’t overweight; my diet and exercise were good. I play tennis!”

But, he says, stress from a new job role had really gotten to him. “I’d started a new job I really liked, and I just didn’t quit. One thing I learned: the work will always be there. You have to take time for yourself.”

John will celebrate 31 years at his employer this November. At 54 years old, he’s thinking he may retire early. “I don’t know what I’ll do; I just won’t work,” he says.

The entire experience has changed his outlook on life. “Going through this sort of experience makes you value your life and the time you have left.” He says he’s lost some weight and has one more session of physical therapy to finish. “Sudden cardiac arrest is a great life changer,” he says, “but you’ve got to survive it first!”

Now John is focusing on his family and on reducing stress in his life. “Stress is invisible,” he says. He’s even influenced some of his colleagues. “One of my coworkers says he and his wife have decided to retire early, too.”

Sarah and the rest of the family are helping John celebrate his new focus on life. “He’s the light of our family,” she says.

Remember: if you are experiencing the symptoms of cardiac arrest, dial 911 and be taken to the hospital immediately. Check out our Know the Signs page for more information.